Mouse Exclusion with Vents and Foam

Today I got a call from a customer that is in the process of selling their home. During the buyers inspection it was discovered that there was mouse activity under the house. It was first noticed because some of the insulation under the home had fallen down and there were droppings and bird seed spread throughout the crawl space.

After a little inspection we discovered that there were to main areas that seemed to be where the mice were coming in. Both spots were right by each other which made it a little easier for me to solve the problem.

The first was where the tubes from the AC compressor were run through the vents in the foundation. The HVAC company cut a hole in the existing vent and never closed up the space around the pipes so that small rodents couldn't get back in.

I used my go to screen material (metal gutter screen) to close up the hole tightly so this wouldnt be an issue in the future. I think it turned out nicely.

Next and maybe a little harder was a gap in the foundation that the builder left. This gap was about 2-3 inches wide on the inside of the crawl space.

What I ended up using were some 2x4s that we had a round to pound themin the hole and then nail them to the boards behind them so that they wouldn't come out. After that we adde a litle 2x1 to fill some of the space as well. with those in place we then used expanding foam to seal up any of the remaining gapes or spaces that may have remained. We also injected more of the foam on the exterior of the home where there was also a gap to be sure we closed the whole.

Overall the project was realatively easy and should do a great job at keeping more mice from trying to make a home in this crawl space. 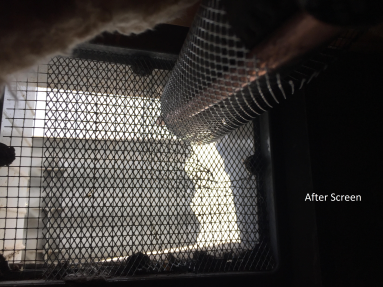